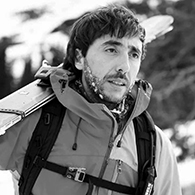 Producer of the film 'Reach your limits'

Being an organizer of the biggest adventure competition in Bulgaria – Xco Adventure Cup, and one of the leading figures in adventure races. He was responsible for organizing the previous challenge of Disl – “5 peaks”. That’s the moment when Dimitar learned to appreciate the madness of Kiril, and since then he takes personally everything that Kiril does. Besides keeping Kiril alive and healthy, his main responsibilities were to share his strength, to run by his side, or just be a supportive friend. Dimitar is a person who can see the big picture, which helped him react to the constant changing obstacles and to rewrite the tasks of the entire team.