'Dirtbag: The Legend of Fred Beckey' wins the Grand Prize of the 10th edition of Bilbao Mendi Film Festival 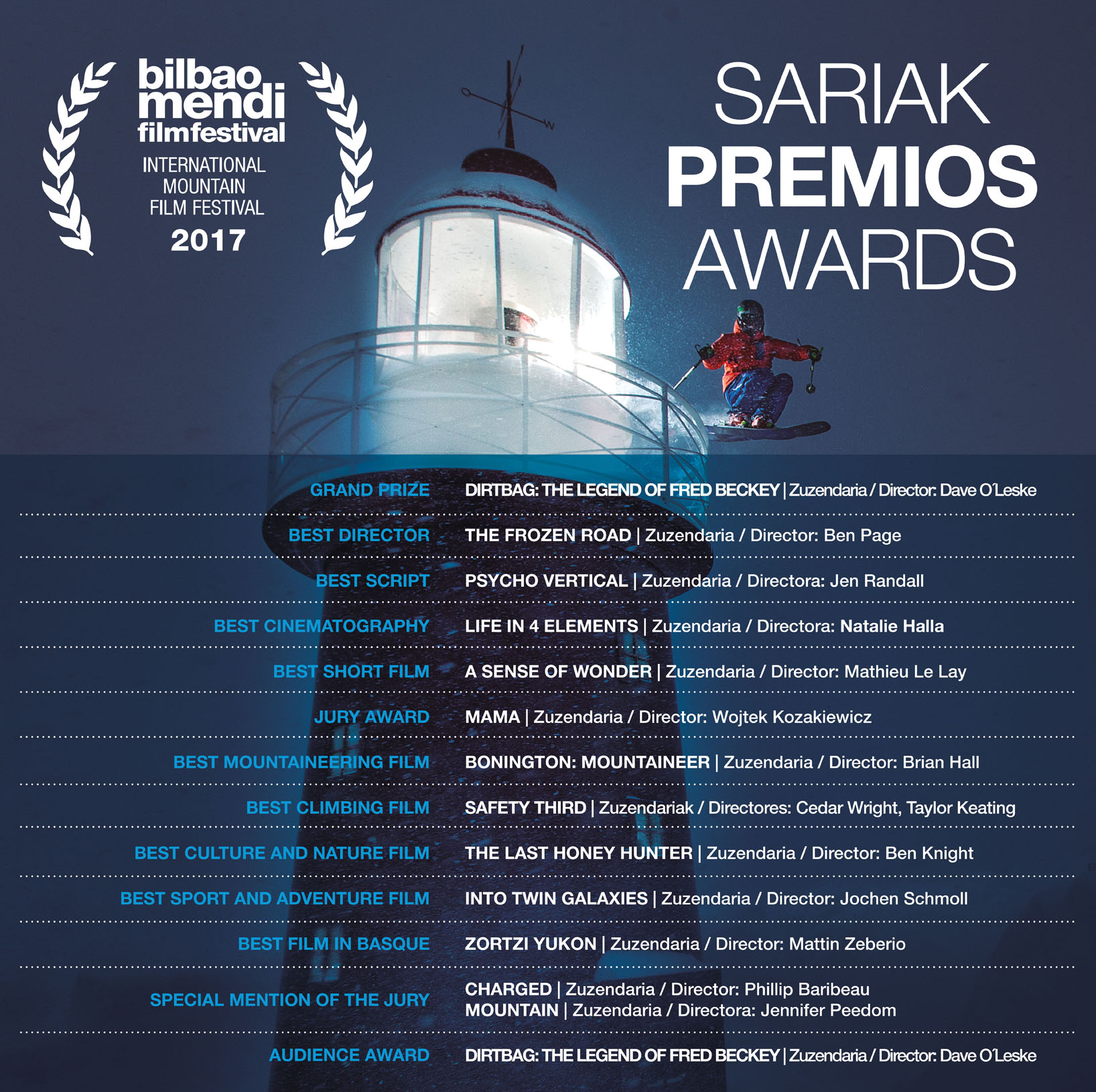 Bilbao, 17th December 2017. The 10th edition of Bilbao Mendi Film Festival is coming to an end with this highly anticipated moment. After the screening of 51 films of the Official Selection over the past 9 days, the Jury made up of Jesús Mari Lazkano, Nancy Rosenthal, Jack Tackle, Paul Urkijo and Deb Smythe have decided to award the Grand Prize of the Bilbao Mendi Film Festival 2017 to Dirtbag: The Legend of Fred Beckey.

The US film directed by Dave O’Leske and produced by Jason Reid has won 6,000 Euros and the Grand Prize (a Golden Eguzkilore). According to the Jury, Dirtbag immortalizes one of the most charismatic and influential climbing legends of North America and the world. The film shows the career of a man who, disregarding fame, focused on his passion. After 12 years of filmmaking following Fred Beckey’s footsteps, the documentary has been released right after the climber’s decease, making the film the best tribute he could have ever received. This film, irreverent and hypnotic, is an indispensable and great twilight story of a soul that has been equally misunderstood and admired by mountain lovers.

Best Director: Directed by Ben Page, The Frozen Road is a film that tells the story of a young man embarking on a personal adventure through a sea of ​​snow. His determination to shoot the film in solitude deserves to be applauded, since it added an enormous difficulty to the trip. However, he never lost track of the creative and aesthetic intention of this film. As a result, he ends up with an absorbing and narrative story that involves the audience into the adventurer’s experiences.

Best Cinematography: Life in Four Elements is a stunningly visual experience that covers four completely different and extreme environments: earth, air, water and fire. The cinematography not only captures the physical beauty of these challenging locations with a creative aesthetic, but it also intimately reveals their emotions — the passion and risks that each of the individuals face. The cinematography has a very particular narrative, which heightens the viewers' awe for the dangers and necessity of these four elements.

Best Script: Psycho Vertical brings us the main character’s pursuit for happiness and balance. The script’s structure uses climbing a wall as a metaphor for his own life, establishing a parallel link between the decisions and customs of the two concepts: climbing and life; it is done in an unconventional way that is full of imperfections, but it yet serves to reach the top. The sincerity, eloquence and sense of humour make his story a fun and enriching experience.

Best Short Film: A Sense of Wonder is a brief visual journey that shows the mountain as a subtle, fluent and dramatic revelation of magic and transcendental moments.

Jury Prize: It is the result of a unanimous decision. The Jury Prize of the 10th Bilbao Mendi Film Festival has been awarded to Mama, a film about the fulfilment of Kinga Ociepka-Grzegulska’s dream of leading a double life: as a wife and mother of two and as a climber of routes that no woman has ever done before. This compelling film captures the struggle of keeping family and motherhood in balance with the training, sacrifice and dedication that rock climb at its highest level entails. Mama shows the human spirit’s capacity to achieve each individual’s highest dreams with love, support and fierce dedication.

Best Mountaineering Film: Bonington: Mountaineer gathers 60 years of climbing. This film tells the extraordinary legacy of Chris Bonington’s ascents and expeditions from the British Isles and the Alps to the Himalaya. His vision and leadership accounted for numerous new routes and significant alpine climbs in the Himalaya over 40 years: first ascents of the Ogre, Shivling, Annapurna and Everest, among others. A life well lived and defined through climbing. This film compiles Bonington’s passion and contributions with style and grace.

Best Climbing Film: Safety Third. This humorous and sometimes frightening profile of Brad Gobright is a daring and honest story of one of America’s most talented rock climbers. This story shows how passion and dedication fuelled with complete obsession can lead to the highest standards of solo rock climbing; thus setting a new speed record of The Nose of El Capitan in Yosemite. Hugely entertaining yet authentic to the core.

Best Mountain Culture and Nature Film: The Last Honey Hunter. This film brought us closer with Eastern Nepal’s Kulung people, as they follow the ancient and perilous tradition of harvesting hallucinogenic honey. The outcome is a new appreciation for their culture, for the people who follow this ancient practice that is about to disappear, and for the filmmakers who survived bee stings, leeches, and ‘5.10 jungle mountaineering’ to bring us a dramatic portrait of a culture threatened by modern era.

Best Sport and Adventure Film: Into Twin Galaxies - A Greenland Epic. The audience ends up shrouded in an adventure full of emotions, from the very beginning to the end. Its unstoppable rhythm and the beautiful cinematography take the viewer through a nearly epic journey. The main characters, as if they were heroes, end up in inhospitable places and come across many challenges until they get a reward: to live the ultimate adventure.

Best Film in Basque: Zortzi Yukon has been awarded with the Best Basque Film Award. It is a fresh journey that follows the trail of a historic tour, displaying experiences shared by friends. Moreover, a well-composed soundtrack adds value to this art piece.

Special Mention: Charged: The Eduardo Garcia Story is an extraordinary portrait of life, with its craziness and unexpected changes. The jury felt privileged to witness and share the challenges Eduardo and his family faced. Those were documented in a very sensitive way by the filmmaking team. A brave and an uplifting story that also highlights the power of nature to heal both physically and spiritually.

Special Mention: The jury has decided to make a special mention to Mountain for showing the audience a sublime and all-encompassing vision of nature. Through a frightening visual power and an all-enveloping music, this feature is a thought-provoking and evocative film. It shows a fascinating journey throughout the magnificence of the mountains and its complex relationship with the human being.