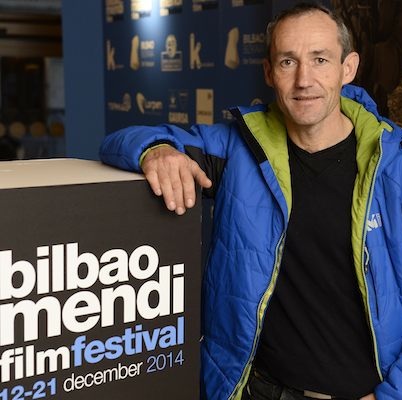 A stone's throw from home, Mikel Zabalza has Etxauri walls, where you go to train. "How lucky to be here, one day," often exclaim, an almost unexpected reflection from a man who has lost count of the years leading climbing these walls. Few like him to appreciate each day spent in the mountains, on a wall, on a glacier ... unique, valuable days that make him a passionate mountaineer. Author of countless openings, more repetitions and a long curriculum, the great Jordi Corominas noted him as the best climber of the country, title that he never would accept or he would welcome with a sincere and genuine laughter of modesty. Director of the Spanish Youth Team Mountaineers, students praised both their motivation and experience serenity, attributes that placed him as the best role model. He comes to the Bilbao Mendi Film Festival to present the film ‘2T on Chamlang’ that narrates his expedition to Chamlang. This fall, particularly on 19 October, the WOPEAK expedition formed by the alpinits Alberto Iñurrategi, Juan Vallejo and Mikel Zabalza and the cameraman Juanjo Otazu, crowned the Nepalese mountain.

The film will be presented in the Sala BBK on Saturday 19 December at 7:30pm.