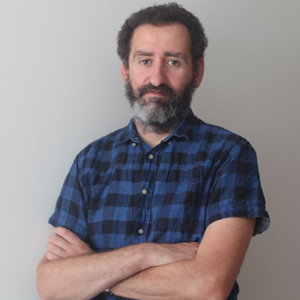 Jon Garaño (Donostia-San Sebastián). He studied journalism at the EHU-UPV and Theater in Sarobe and San Diego (USA). In 2001 he co-founded the Moriarti producer, where he works as director, producer and screenwriter. His films have been awarded in over 100 contests and have been broadcasted in more than fifteen countries. His most important films are 80 egunean, and Loreak, wich was nominated for Goya for best film and was nominated to the Oscars in 2015. His last work is Aundiya, which is not already released. He has also produced the documentary film Lucio and The Arrieta method, and it has several prices.